The Drought Monitor issued at the beginning of April shows some danger for New England. Portions of the region are ‘unusually dry’ and Vermont and a small area of New Hampshire is in Stage 1 drought. No area rates ‘severe’ or ‘extreme’. But the same map at the beginning of March showed no drought at all in southern New England. The NOAA’s Climate Prediction Center shows a 50% probability for higher-than-average rainfall for April to June for New England; it also shows a 60% probability of above-average temperatures. Keep these forecasts in mind (and watch for updated ones) as you go through the season. 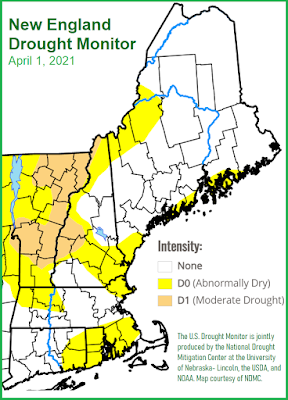